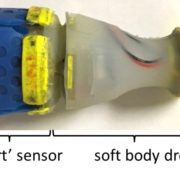 You discover you have a leaky pipe, but you can’t figure out where the leak is coming from. It can be a challenge to identify the source of a leak, but modern technology has come up with a great solution; the shuttlecock robot.

These leaks not just occur within the home, but along the pipes that transport the water from its source to residential areas. Depending upon where those pipes are routed those leaks can cause serious damage to infrastructures as well as being a huge waste of water.

This problem is common in almost every nation that pipes water into homes and buildings across the country. It is a significant enough issue that MIT thought it warranted investigating a possible solution, and what their team of experts came up with is a robot shaped like a shuttlecock that can travel through the pipes and locate the source of leaks. The pipe robot has been named PipeGuard.

Where methods used to locate and repair leaks today are slow and can be extremely expensive, the accuracy and speed at which MIT’s new robot could detect leaks, even very small ones, will greatly reduce the time and expense of doing so.

The PipeGuard robot would be inserted into a pipe via a fire hydrant and then would be carried by the water flow through the pipe system. Using position tracking equipment, the robot would be monitored during its journey. Irregularities in the pipe’s structure would register through the robot’s soft rubber skirt, and the information would be recorded and stored for further investigation.

Once the robot reaches the end of its journey, it is retrieved and the recorded date uploaded for further analysis.

In addition to the model above, MIT developed a version that is capable of controlling its own movement through the pipes. It has been tested with good results, enough that it has drawn attention from Saudi Arabia whose pipelines lose an estimated 33% of the country’s water supply.

As much of Saudi Arabia’s water is gained through desalination, an expensive process, it is vital that the country find ways to not only conserve water but prevent the large percentage of loss that is currently being experienced.

In one test the PipeGuard robot was inserted into a rusted pipe measuring 1.5km long. False leaks were planted along the pipe to test the robot’s ability to detect the difference between real leaks and the planted ones. The robot performed exceptionally well, even detecting a leak that was ten times smaller than any other detection method would be able to find.

Though the PipeGuard has not yet been released onto the market, the potential for water suppliers to be able to quickly locate leaks is exciting. The cost savings alone of early detection will have a very positive impact on water suppliers worldwide. Infrastructures will be far less likely to suffer damages, homes, and businesses will not have to deal with the loss of water supply, and utility bills will likely be reduced as these cost savings are realized.

The MIT team is in the process of exploring the possibility of the PipeGuard not only being able to detect leaks but undertake necessary repairs which if successful has enormous potential benefits.

It’s a little well-known fact that sewers withhold microbial information. Thanks to sewer inspection robots, Luigi and Mario,  MIT scientists are mining through to obtain the answers that they are looking for. They are sending them to underground Cambridge and Boston, Massachusetts to study how illnesses can spread through populations in cities. This project is a three-year-long journey in urban epidemiology, as well as to learn more about edibles that people opt to intake.

Noteworthy Samples Are Being Gathered

Underworlds is a project started by Alm Lab and MIT’s Senseable City Lab that launched Luigi and Mario in July of 2015. Luigi and Mario are advanced sewer inspection robots used to find diseases in waste. Due to their proper structure, these sewer robots were able to inform where they were on their journey, as well as other important details. As they drifted around, vacuuming up samples, every pipe inspection robot spent about an hour or two in the sewer.

The scientists are going an extra mile to ensure data from samples is both traceable local to study what diet of neighbourhoods is, as well as to find out other relevant information that could aid them to discover other details.

What Can Be Detected?

There are a lot of different elements that scientists can detect from samples that they get, including bacterial pathogens, viruses, and biochemical markers from drugs that are either illegal or legal. Scientists are hoping to be able to utilise data to inform policymakers about different public health matters that are affecting or that can affect individuals, including potential disease outbreaks.

Compared to how they were once, several illnesses are not common anymore. In those cities that have poor water sanitation, it has been noted that cholera and typhoid, which were pandemics in our world in a 19th and 20th century, can still affect many people. There is a fever still very present in India. Every year about 493 people of 100,000 in India suffer from this type of fever. If you undertake a calculation, this reflects more than 6 million cases in India every year.

Besides scientists being able to identify previously mentioned details, they can also determine what area of a city has a drug issue, as well as measuring effects of legislation that goes hand in hand with food. Quite incredible!

Even though these innovative devices are not being sent to heavy contaminated sewer systems present, with data and findings that they have gathered, MIT’s scientists hope that when sent to local lawmakers, it could serve them as a concrete justification to expand helpful programs to other cities.

A sewer inspection robot device is being planned to be sent in 2017 to a place outside of the United States. Funding that is needed for this to occur is coming from stakeholders that will benefit from the outcome, including non-governmental organisations, governmental organisations, and a variety of different companies. They are ready to make it happen, and it seems like individuals are with it, too, as it can help everybody in various aspects.